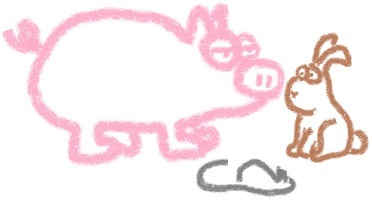 Last week I went to the library and got out a couple of classics: ‘Animal Farm’ by George Orwell and ‘Of Mice and Men’ by John Steinbeck. Both are small books of about 100 pages, easily read in a few hours, and both are books I probably should have read at school. So when I saw them showcased together in my local library on one of those revolving display stands normally used to sell postcards I thought ‘why not’.

Animal Farm was exactly what I expected it to be. Not what you’d call spectacular writing, but a very interesting idea, ably executed. Basically, it fulfilled the promise of the premise nicely.

Next came Of Mice And Men. Steinbeck won both the Pulitzer Prize and the Novel Prize for Literature, so I was expecting something a bit special. It wasn’t. In fact, I came away from the book feeling pretty cheated. I felt that the author had somehow been in breach of the implied contract between a writer and his readers.

This got me thinking. Do writers really have an implied contract with their readers? And if so, what are the terms?

The Duty of Care

Books and movies are often described as a rollercoaster of emotion. Sure, if you pay to go on an actual rollercoaster, you expect (and demand) a few ups and downs. You are perfectly prepared to feel like you’re about to die at any point, but ACTUALLY dying? If the rollercoaster operator has to tell an on looking Mrs Pigfender as she sees me launched off the track, “I’m sorry ma’am, but on this one the rider dies at the end” then she would be justified in being just a teeny bit upset. At the very least, I’d expect her to want her money back.

I absolutely want a fair amount of mild peril in my stories. I want to have the tangible risk – hell even a seeming inevitability – of failure in there. But I still expect the rollercoaster to end and bring me and the protagonist back to a stable state at its conclusion. Sure it can be at great personal cost to the protagonist – not everything has to have a happily-ever-after Disney ending – but he still has to win, right? I mean, would you want to watch a James Bond film where the bad guy succeeds? An episode of Perry Mason where the guilty person gets away with it? How about reading a Lee Child book where Jack Reacher fails to solve the problem and gets a bullet in the head for his trouble?

Do we really want to watch films or read books where the underlying message is no more sophisticated than “the world sucks” or “sometimes bad things happen to good people”?

Just like the classic relationships of teacher / student, parent / child, and doctor / patient there is surely a duty of care between an author and his readers. That duty is to not set up a scenario so impossible that they end up copping out and just saying: oh well, I guess the good guy loses. There are writers out there who think that if the story prompts an emotional response (whatever that emotion happens to me) then they have done their job. I contend that if they try to create that emotional response through simply abusing their duty of care – by breaching what they know is in that contract they signed with us as readers – then they are guilty of the writing equivalent of a doctor taking advantage of their patient.

Sure, you can evoke strong emotions that way. That doesn’t mean I’m going to thank you for it.

Let me know in the comments if you disagree (or agree), or if you can think of anything else that might be in the implied contract between an author and his readers.

Please also feel free to compliment me on my drawing of some animals.

2 thoughts on “An author’s contract with his readers”