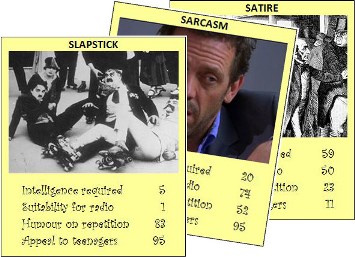 Someone recently reminded me that sarcasm is supposed to be the lowest form of wit. This got me thinking. Is there an established hierarchy of wit that I’m not aware of? Is it purely linear, with satire at the top, and sarcasm at the bottom? Or is it multifaceted, with each type scored on a number of different qualities, like some sort of abstract series of Top Trumps?

Anyway, in order to help improve the world a little bit (or at least make it conform closer to my own world view), I present the pigfender guide on how to respond to someone who says “sarcasm is the lowest form of wit, you know” to you.

Step 1 – Ask them to complete the quote

If the second half of the quote didn’t give it away, the fact that it’s from Oscar Wilde, well-known witticist from times gone by, should give you a clue. There’s a pretty good chance that Oscar was being sarcastic when he said it.

Step 2 – Ask what the highest form of wit would be

I’m guessing pretty close to the top would be satire. You know… Slaughterhouse-five by Kurt Vonnegut. Animal Farm by George Orwell. The New Statesman by Laurence Marks and Maurice Gran.

Those oh so clever tales. They seem to be about one thing but really they are a commentary on what is bad about that thing. So saying one thing, but meaning something else. Sound familiar?

Let’s say you make a fabulous satire on some particular viewpoint. People who agree with you will see the satire and laugh. The others will agree with your characters and laugh. It’s a classic case of hedging your bets. Sarcasm does the same thing, but comes off the fence. It picks a side.

Sarcasm is satire without the insurance policy. Done properly it is about as high a form of humour as you can get.

But, yeah. “Sarcasm is the lowest form of wit.” Great argument.

4 thoughts on “Is sarcasm really the lowest form of wit?”