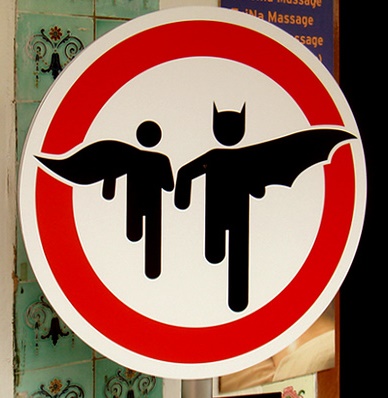 Just like my earlier post on writing a bestselling romance novel, this a post I made on the interweb a while ago that made me chuckle(1) so I thought I’d republish it here.

About the time that the Will Smith film Hancock had come out I had started thinking around how a character might go about trying to develop superpowers. I never did anything with the premise, unless you count this little “article” here.

(1) Travel to a community of weaklings so that you appear powerful by comparison.

cons:
– may involve difficult travel arrangements, especially to other galaxies
– no true powers gained… super only by comparison, so less fulfilling

notes:
can be obtained in practice by being a primary school teacher, with powers such as
– being taller and stronger
– basic maths and spelling
– able to control bladder movements

(2) Bitten by a radioactive animal, with powers derived from traits of animal used.

cons:
– may kill you
– long term effects untested; may cause cancer

(3) Use of extensive R&D budget to develop technological superiority.

Photo lifted from the Flickr page of Brett Jordan