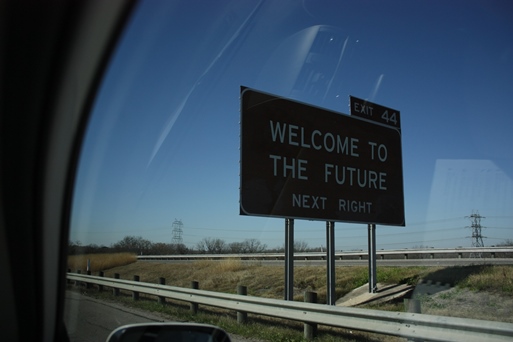 I was flipping through an issue of Waitrose Kitchen yesterday that Mrs Pigfender had left by the chair I use to drink tea. I’m pretty sure it wasn’t a strategic deployment as there were no dog-eared pages, sticky notes or handwritten messages next to pictures of expensive gadgetry(A). Anyway, the magazine had an article pooling the thoughts of various chefs and food journalists on their vision of what cooking and eating would be like fifty years from now. It was, as you might expect, a load of tosh. Fun, but tosh. The article was filled with fanciful notions that would be more at home in an issue of CrazyAbsurd SciFi Tales Monthly. We’re talking 3D printers that use powdered cartridges to paint food on your plate, and fingerprint scanners which can diagnose your state of health to recommend the most appropriate recipe for your nutritional needs.

But it was a fun enough game, so I got thinking about applying the same idea to my own field: the fine arts of reading and writing. In an attempt to avoid the fanciful and downright improssible(B), I have taken a quasi-scientific approach. ‘Scientific’, because I’ve tried to keep the 2064 vision as a sensible extrapolation of current technology and trends, and ‘quasi’ because, let’s face it, it’s a statistical analysis of anecdotal evidence taken from a sample size of one.

Print books will be for extremes of the quality spectrum
It’s an increasingly common sight to see toddlers and young children with iPads in their hands, so I’ll go out on a not-so-controversial limb and say that in fifty years’ time the last of us to still hold a romantic vision of the printed book will be too old to go to the shop by ourselves. Given that eReaders will be used for almost all new book purchases, paperbacks and hardbacks will be relegated to just the handful of books that hold special meaning in our lives: The classics that we re-read every year(C) and vanity press for the unpublishable.

Since I’m suggesting eBooks will be the norm, we’ll lose the first ‘e’ and just call any of the electronic formats ‘books’. But I doubt we’ll go as far as calling the print alternatives pBooks or anything like that. ‘Paperback’ and ‘hardback’ will be used instead.

Bookstores will be virtual
If our books are electronic, it perhaps goes without saying that our bricks and mortar stores will struggle, either diversifying to other fields or becoming extinct. Without a place to go and browse, however, consumers will be increasingly reliant on the New York Times Bestseller list and the Richard and Judy Book Club to find new titles. Marketing has always been important, but in this new world, an endorsement from the Oprah of the day will be all but essential.

Libraries will thrive… kinda
If most books are eBooks and your local library will lend them to you for a token annual fee(D) then why *wouldn’t* you use a library instead of buying books yourself? There are far more quality books out there than you could ever read in any chosen genre, so the argument that you need a permanent copy (for re-reading) instead of a rental is going to be increasingly untenable. The trouble is that this will make lending institutions very unpopular with publishers and authors. At the moment there are inbuilt checks and balances which prevent a mass exodus from buying books to borrowing them. The main reasons are:
1) An unread book looks neater,
2) Libraries require proof of address to join, but not any certification of being free of communicable diseases, and
3) I’m told that a lot of people like to read while on the lavatory.

None of those are an issue with eBooks, so after protracted legal conflict and political debate, libraries will continue to exist, but you’ll only be able to download your content to proprietary library devices which will be deliberately chunky, ugly and full of little grooves and troughs in which the dead skin cells of previous patrons can collect and fester.

Customisation will be king
Just in case the point above leaves you with the wrong impression, I don’t think that paper or printing will be expensive. For one thing, paper actually does grow on trees, and secondly, it’s really easy to recycle. Likewise, I predict that printing will become better, faster, and cheaper. Combine that with dwindling demand and I imagine all print books will effectively be print-on-demand.

This opens up additional possibilities. The population will have an increased expectation for the kind of customisation available as a result of electronic media (Moonpig‘s approach to greeting cards being a present day example), so I suspect you’ll be able to walk up to a special Barnes & Noble booth, pick your font and layout options, upload your own cover, maybe even change the name of the bad guy to that of your best friend and print a special one-of-a-kind edition of the latest Booker prize nominee.

Most books you pay for will be rubbish
It used to take discipline and a burning desire to tell stories in order to be a writer. Hemingway stood and slammed his stone-like fingers into the unforgiving levers-for-keys of an old fashioned typewriter. King would finish his day teaching at the local high school and then lock himself away for hours more at his desk, driven by an untameable passion to write. George Orwell once wrote: “Writing a book is a horrible, exhausting struggle, like a long bout of some painful illness. One would never undertake such a thing if one were not driven on by some demon whom one can neither resist nor understand.”

In 2013, the trend was moving away from writing in a dedicated office space in dedicated writing time and increasingly towards providing convenient ways to capture your thoughts and ideas on the move. What starts with note taking apps on your iPhone will develop into fully fledged writing programs(E), and down an inevitable spiral towards the point where writing is something that requires no commitment at all. Literally anyone can do it, anywhere, in tiny snippets of snatched time(F). Combine that with the ease of self-publishing (and the corresponding decline of publishers and agents as gatekeepers) and everything available on the market will be horrible rubbish. The incongruent writing will lead to incongruent prose. The low barriers to entry will lead to low standard work getting over the hurdles. Just as the art of telling stories through moving pictures has evolved from films into TV dramas, then soap operas, then the horror that is reality TV, literature will too descend into collections of thoughts people had while wandering about. Honestly, I’m pretty much just describing 2014 at this point. Give this fifty years to fester, and the quality of the average new release will be mind-meltingly poor.

But books you get for free will be excellent
If the last point leaves you thinking there’s no hope, on the plus side you’ll be able to get some amazing books for free. Current copyright laws vary from country to country, but basically tend to work along the lines that works enter the public domain after the author has been dead for fifty years. So, unless there is a significant overhaul in copyright legislation(G), 2064 will see a large level of contemporary fiction (by which I mean ‘written for the masses’) freely available through distributors such as the excellent Project Gutenberg.  Public domain books will no longer mean just serious works of fiction by the likes of Dickens, Austen and Melville, but will include the more populist works of anyone who is already dead by the time you read this.

I don’t mean to start an argument here. I’m sure that plenty will feel that Dickens was writing for the masses, and that Iain Banks was writing books for people to cherish rather than read-and-discard. My point is simply that the public domain will encompass a much wider spectrum of writing styles, genres and target audiences than exists at present, and that technology advances mean that a far greater proportion of books written in the last ten years will be saved for future generations than was possible in the 1800s.

Sadly, the list of works that will be the public domain in 2064 includes the likes of Iain Banks, Tom Clancy and Vince Flynn(H) who all passed away in 2013. Which is perhaps a fitting point to come back to the present. Thanks for the words, guys. May you rest in peace.

(A) Although in all fairness to Mrs Pigfender, she strongly favours the dining table over the kitchen so she is far more likely to want, say, a box of truffle pasta than any tool used in the dark art of preparing or handling ingredients.

(B) Somewhere between improbable and impossible.

(C) Like Flowers for Algernon by Daniel Keyes, which if you still haven’t read after all the times I’ve named-dropped it on this site then, hell, I’m not sure I want to be friends anymore.

(D) For youngsters unaware of what a library is:
Library (noun):
1. A non-virtual Spotify service for books
2. A formal room used to reveal the identity of murderers in Agatha Christie novels.

(E) Literature and Latte, for example, are working on an iPad / iPhone version of their Scrivener writing software… the horror!

(F) I’m just as guilty. While I pretty much write book stuff on a laptop at a desk in dedicated sessions, a good proportion of this website is written whilst on trains using the Notes application on a SIM-less iPhone 3G.

(G) Many are calling for one – Disney being a prime example. Personally, I think there will be lots of debate but very little change, save for perhaps standardisation of the qualifying period across countries.

(H) You may recall, Vincenzo was part of the reason I joined goodreads.com. I actually only found out that Flynn had died while writing this post, so I’m pretty bummed out today. :(