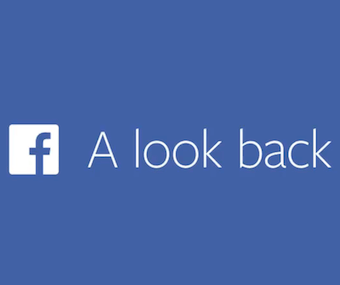 I’ve seen a lot of facebook videos over the last day or so. You know the 62 second things automatically produced when you visit facebook.com/lookback.

The problem that I have (other than the fact that the tune is now stuckinmyhead) is that they all, kinda, well… disappoint.

See, although facebook is ten, most of our facebook accounts aren’t. The average user joined (I’m guessing here, but statistically speaking it shouldn’t be far wrong) about five years ago. Five years isn’t enough to be a significant period in most peoples’ lives. Unless you joined at the age of 13, you won’t look that different in your profile picture, and your life won’t have evolved that much. Sure, there are a few people who just happen to have been caught in a sweetspot of life change during a social media boom, so that the algorithms handily catch them finishing school, meeting someone special, getting married, getting a job they like, and having their first kid. For the rest of us… well, it’s just 5 or so pictures of eating and/or wearing silly hats.

Even if you look at Mark Zuckerberg’s video (who presumably will have one of the most ‘ideal’ uses of facebook), it doesn’t really show much. Think about how much Mark’s life has changed since he started facebook and then ask yourself how much of that comes across in his video. A quick scroll down any of your friend’s photo albums (or just a run through their mobile uploads / timeline photo album) is likely to be far more nostalgic.

The main reason the lookback video doesn’t work? The video feeds on the worst aspect of facebook: it measures the importance of life events by how many likes it got, and it focuses inwardly, looking purely at your own use of facebook and not your friends.

Facebook at its best isn’t about how many opportunities you’ve had to say ‘look what I’ve been up to’ to the world. Facebook at its best is about connections: the events you’ve been to; the groups you’ve decided to be associated with; and — of course — the friends you’ve made… none of which are represented in the videos.

Speaking of connections, please stop by to say “hello” on Facebook or on Twitter. You can also sign up to receive updates from this website using the button that hovers somewhere near the bottom on the right.