The first decision I have to make when starting the preparations for a Novel In A Day event(A) is about what kind of story I want to tell: The original NiaD (2011’s The Dark) was a cross between a horror and a detective novel; The one after that (2012’s Lunar520) was a science fiction thriller; Last year’s effort (2013’s Made Man) was a mafia tale set in 1962 Las Vegas(B). I’m a big believer that the story comes first and everything else follows from that, but I’m equally conscious that there is a moral obligation on me to make sure each successive NiaD does something different; another gangster tale is (sadly) not an option(C).

Which got me thinking: Do I know what different genres there are out there? Do I even know what a genre is?

Back in February I joined a new library. Being unfamiliar with the layout, I consulted the directory on the wall. Listed on the chart were things like Science Fiction, Romance, Horror, and Young Adult, but it seemed to me like those were all answering different questions to each other.

Science Fiction, like Fantasy, is defined by what reality the book is set in. Romance is a story (eg, boy-meets-girl), as is Crime. Horror is neither of those things… it’s an emotional response. Young Adult is even worse; it’s defined by who might read it, which is pretty silly given that YA books are read by people of all ages.

So when I got home I started playing around in Scapple to try and figure out a way of understanding genres in my head. The starting point I took was that every book will be categorisable in three ways: Reality, Story and Emotion (I dismissed things like ‘target audience’ as bigotry rather than genre classification).

The diagram below was the result (you can download the Scapple map used to create it here), which includes some examples of well known books, as I figured that will explain how it works far more clearly than any blurb I put here. 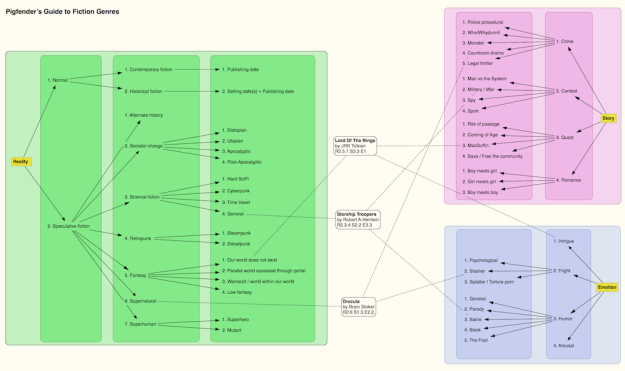 It’s a work in progress, so please feel free to feedback any comments. I’ve no doubt, for example, that there are sub categories of arousal of which I am completely unaware. Remember that things like “Paranormal Romance” and “Romantic Comedy” aren’t a sub-genre of Romance stories under this system, merely a combination of a Story (Romance) with either a Reality (Supernatural) or Emotion (Humour) respectively.

Let me know what you think. You can also comment with your favourite book and how that would be classified under the PF Genre system.

(A) – Apart from whether to actually do one or not, of course.
(B) – Thinking about it now, I’m not sure we mention anywhere in the book that it’s 1962.
(C) – On the other hand, it does mean I get to keep future mafia ideas to myself. :D