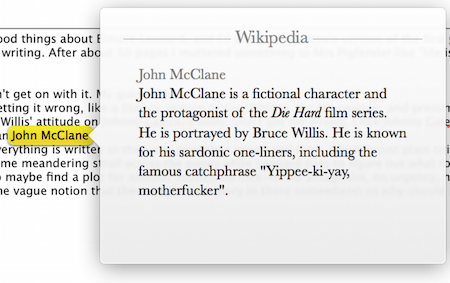 In the play by Christopher Marlowe, Faust sells his soul to the devil [Spoiler, sorry]. But like any sensible commercial operative, Faust does have the sense to do a little bit of due diligence before completing the transaction.

The exchange, if memory and Google serve me correctly, goes something like:

FAUST: So, Mephy-baby. I thought you were supposed to be in hell? They, like, let you out and stuff?
MEPHISTOPHELES THE DEVIL: Why this is hell, nor am I out of it. Think’st thou that I who saw the face of God and tasted the eternal joys of Heaven, am not tormented with ten thousand hells in being depriv’d of everlasting bliss?
FAUST: Huh?
MEPHISTOPHELES THE DEVIL: O Faustus! Leave these frivolous demands, which strike a terror to my fainting soul.
FAUST: Man up, dude.

2014 was the year that I got my first Mac. There’s a lot I love about Windows, and certainly there are one or two things to dislike about Mac OS, but on balance I’ve been very happy indeed. After all it’s hard not to love an OS that enables you to tap three fingers on a word and have the picture you see above pop up. In fact, I’d say it’s the access to the inbuilt dictionary that defines the OS’s ease-of-use to me more than any other feature.

Anyway, in spite of my general Maccyness, I still spend a lot of my computer time on Windows-based machines and (like poor Mephistopheles) I find that, having glanced upon the joys of the three-finger tap to bring up the dictionary, being depriv’d thereof is pretty miserable. And it’s not just when I’m on the Windows machines; any Mac software that doesn’t use the inbuilt text system (I’m looking at you, Word for Mac 2011) is missing it as well.

I was very excited, therefore, to get my hands on a great piece of Windows software called Clever Dictionary. It is, as the name suggests, a dictionary app that tries to be a bit cleverer. It has a simple interface that gives you access to a choice of thesauri (including Roget’s and a nicely executed visual thesaurus), as well as a reverse dictionary (to search for words which contain specified terms in their definitions), a rhyming dictionary (for all you budding songwriters and poets), wikipedia, a dictionary of quotations,… oh, and a dictionary. But the useful thing from my perspective is that it just sits in the background, ready to be called on from anywhere on your machine with a simple global keyboard shortcut (Ctrl + F9 by default, but it’s customisable).

It also did it’s very best to save some pretty serious swearing yesterday. I’d been using the rhyming dictionary to write a song (because despite having no discernible talent for music, I still enjoy it immensely), when my computer ran out of power (how I missed that warning I don’t know) and shut itself down. Unfortunately, I’d been working in Notepad, and the thing about Notepad is that it doesn’t save temp files anywhere. So when I rebooted all the work was GONE.

So I swore for a few minutes, made a cup of tea, and then went back to the computer to start again. Except… Clever Dictionary had remembered all the words I’d looked up, so with a few clicks of the ‘history’ button I was able to successfully recreate all the last words of each line of the song… and from there work out the rest!

So yeah, check out Clever Dictionary. It not only saves you from Mephistopheles’ hell, and soothes the anguished cries of an upset artiste, it also, you know, helps you look up words.

Clever Dictionary is Windows only (at the moment), costs under ten bucks, and has a 30 day free trial to find out if you like it. You can find it at the incredibly easy to remember www.cleverdictionary.com which is laden with screenshots, feature lists and such the like.