This time, the questions are being answered by novelist, David Morrell. As you might expect of the co-founder of the International Thriller Writers, David is widely considered to be a Thriller Writer’s Thriller Writer. His books have set new standards for combining high action / adventure plots with intelligently portrayed characters to produce some of the most compelling stories of the modern era, starting with his 1972 debut novel, First Blood(A), and continuing with the likes of The Brotherhood of the Rose trilogy(B) and many more.

David’s dedication to research and realism is evident in all his books (his website, davidmorrell.net notes that David has been trained in, amongst other things, executive protection, hostage negotiation, defensive/offensive driving, and ‘assuming identities’, and he earned his private pilot’s licence in preparation for writing The Shimmer. He is also an honorary lifetime member of the Special Operations Association and the Association of Intelligence Officers, which probably tells you everything you need to know).

In addition to his productive career writing novels (his thirtieth novel(C) is due to be published next month), David has written three non-fiction books, numerous essays and contributed to such iconic comic books as Captain America and The Amazing Spiderman.

1 – What did you do before you did this and what do you miss about it?
I was always a fiction writer, although for sixteen years I was also a literature professor at the Univ. of Iowa (in the English department, not the workshop). I miss interacting with students, which is why I teach writing at various conferences each year.

2 – How many projects are you working on at the moment and what can you tell us about them?
I’m working on only one project, and that’s usually the case. It’s the final novel in a trilogy of mystery/thrillers about 1850s London. The first two are Murder as a Fine Art and Inspector of the Dead. All feature Thomas De Quincey, one of the most sensational and brilliant personalities of the Victorian era.

3 – If you had to quit either reading or writing which would you pick?
I’d quit writing. Reading generates ideas, and without them, I wouldn’t be able to write.

4 – If you could magic another hour into the day, where would you put it and what would you use it for?
It would be in the evening when I could do more reading.

5 – What is your pet hate in writing / language?
No matter how much an author tries, a book can always be better.

6 – Are there any genres that you love to read but which you never write?
Science fiction. I don’t have the science background, and the research to catch up would take forever.

7 – Do you have any writing rituals, habits or idiosyncrasies that you can share?
Before beginning each project, I write a letter to myself that asks the question: “Why is this book worth a year of my life?” There needs to be something about a book’s theme, its research, and the way it is written that grabs me and won’t let go.(D)

I print out each day’s work, and the next day, I read the previous ten pages to get up to speed. Reading a printed page is different from reading on a screen, and to get a further new perspective, I never read at the same desk where I write.

8 – What are you selling and where can I buy it?
Inspector of the Dead (set against the background of the Crimean War and the numerous actual attempts to assassinate Queen Victoria) will be published by Mulholland Books/Little, Brown on March 24. 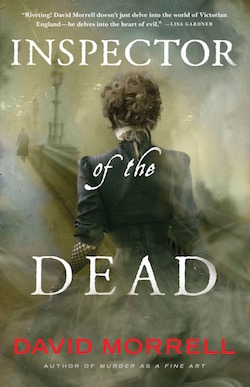 (A) – Described on release by Time magazine as ‘carnography’, First Blood introduced the world to Rambo. As I’ve mentioned before on pigfender.com, don’t read the introduction until after you’ve read the book.
(B) – Later made into a TV mini-series starring Robert Mitchum.
(C) – If I’ve counted correctly.
(D) – This shall hereafter be known on pigfender.com as Morrell’s Law.