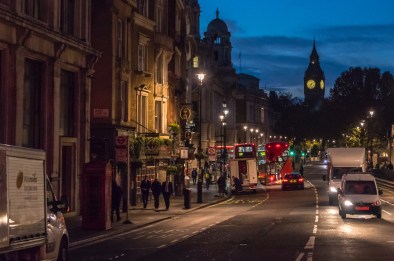 His voice is slow and quiet, with just the hint of a Scottish accent. I’ve not met enough Scots to be able to guess which area, but the word Aberdeen pops into my head anyway, with absolutely no credible rationale.

I keep reading as I walk. It’s after 10pm and it’s dark, but this is my familiar walk home so I can tell by the changing intensity of light on the page that I’m about to hit a lamppost. I make a quick mid-stride step to the left to avoid the impact.

Being impressed by walking is Strike Three. Strike One was thinking that reading a book is rare enough to warrant comment. Strike Two was talking to someone while they’re reading. Nobody who reads thinks it’s acceptable to interrupt people while their nose is in a novel.

I glance up briefly from the page, just to check that I’m not about to get into a more physical “conversation” than I’m in the mood for. This is London, and we’re not sociable on the street. He’s about my age, maybe five years younger. He’s also about my height, but a bit skinnier. Dark suit. No tie. His hair is red enough to be noticeable despite the orange glow from the street lights. A ginger scotsman, what a cliché.

I lift the cover enough to show him, and read out the title. I can’t pronounce the author so don’t bother trying.

‘Yeah, it’s very well written.’ I go back to the next paragraph.

I close the book but keep walking. ‘It’s a novel. Sci-fi,’ I say. ‘A kind of dystopian future story, but without any recognisable plot. A bit like an Amish Star Trek.’

He sniggers. ‘An Amish Star Trek?’

‘Yeah,’ I laugh too. ‘Nothing really happens. It’s about the pointlessness of life, and how it’s only the bad things that happen to us that interrupt the monotony and give life some perspective.’

We get to the stairs to exit the train station and start to descend.

‘Would have been a tough pitch meeting,’ I say and smile. ‘It sounds a bit depressing when you explain it out loud, but it’s still entertaining. It’s very well written.’

As we exit the station we split up and start off in different directions.

‘Everyone loves Star Trek,’ he says, and disappears from view behind a van.

‘Have a good one,’ I say, not really loud enough to carry at this point. I open the pages and continue to read in the glare of the street lights.